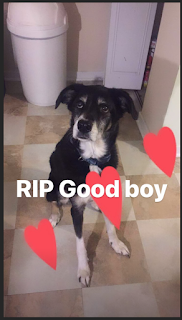 My daughter posted this picture of him when she heard the news, a decidedly more spry, less grey version of himself.  He’d been with us for 12 years, the majority of each of my kids’ lives.  He was my walking companion and my wife’s garden helper.  He greeted students a the door with glee and nosed them for treats.  He kept door-to-door solicitors at bay, and he did his part to protect us from the mailman and his cohorts.  He was my late-night buddy as we watched TV and shared cheese & crackers, and he was our morning alarm clock, making sure we were up to tend to the boy.

Even his most aggravating habits were part of our lives…

Tonight, though, there’s the remainder of my son’s sandwich on a plate in the sink… there’s no one here to do his job.

Duncan made two heroic efforts in his last hour: moving from his bed to the patio door, and then crossing patio to the grass.  As a light rain began, we fetched his blanket to help carry him back inside; instead, we covered him and lay with him in the grass until he took his last breath.  We carried him the rest of the way to his final place in the garden.