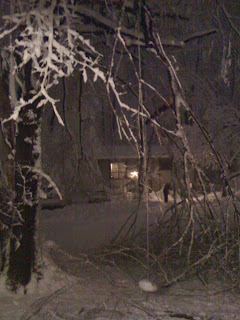 Heavy, wet snow finally took some limbs I couldn’t reach with the telescoping pruning saw late last year. Somehow, the kids simple swing is still holding on. When was the last time a child sat on it? I don’t know, but we’ve told them not to because of the weak limb.

The husband of the former owner of the house died pruning this tree, we were told by a sentimental neighbor. At one point, the tree was so unruly that it was topped, and has long since resumed its posture. Standing between the front of our house and the western horizon, it is the house’s cooling shade from spring through autumn—and morning shade for our neighbors across the street. Of course, every fall it swamps the lawn with shed leaves and branches that we are still cleaning up in spring. Is it odd that we don’t think about that while we’re burning the fallen limbs in the fire pit in the fall. Since nothing grows beneath it, there’s no lawn to maintain; but, the rains rolling through erode the hill on which the house sits. Perhaps the roots hold together what remains, but perhaps someday they’ll encroach upon the pipes and foundation. Any impulsive thoughts to remove the tree are easily countered by the expense and homeowner association paperwork process that have to be readied beforehand.

This is a perfectly precarious balance: with a determined thought in either direction, this tree stands or falls with all of the pros and cons that result; but absent a compelling desire, the consequences either way are clear.

Such a big deal, this old tree, so much more than the its limbs are attached to it by so many people, weighing it down… So many different things beside its roots are keeping it standing, perfectly balanced, ready to fall.